It may be impossible to spend a day in Chevrolet’s new C7 Corvette without someone asking what you think about the iconic sports car – magnetism is an understatement. I was approached by strangers in a grocery store parking lot, parents waiting for their children after school and enthusiasts on a canyon road after I had pulled to the side to take in the view.

All sneak up with a curious smile on their face, take a deep breath and then start spitting out questions like an overly aggressive prosecuting attorney. Is this the new Corvette? What do you think of it? Is it fast? How much does it cost?

While a closed-roof coupe offers a protective shield from the verbal onslaught – it’s hard to field questions through a solid roof – the drop-top Stingray Convertible allows the full inquisition to rain down each time one slows to a stop. These opportunities include incessant chatter with complete unknowns at stop lights, street corners and even while stuck in traffic. 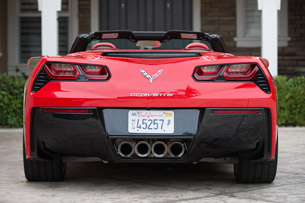 My first time behind the wheel of the all-new seventh-generation Corvette was last August. In an event tied to Pebble Beach, I was fortunate enough to spend a day driving the just-launched Stingray coupe, testing both the six-speed automatic and new seven-speed manual gearbox variants, in Monterey, CA, on pre-planned driving routes. This time, however, Chevrolet dropped a bright-red convertible in my driveway and told me that they weren’t going to ask for its key to be returned for a full week. Understandably, I couldn’t resist.

Even though the coupe and convertible have unique physical attributes, Chevrolet engineered the C7 platform with the drop-top in mind. The two share identical chassis tuning and performance technologies, says the automaker, with everything from brake rotor size to suspension damper rates and the steering systems being virtually identical. The only structural changes to the convertible model are minor, with the safety belt mounting points repositioned and some alterations to accommodate the folding roof mechanism.

Interestingly enough, the curb weights of both are remarkably close. The coupe tips the scales at 3,298 pounds, while the convertible is a mere 64 pounds heavier at 3,362 pounds. 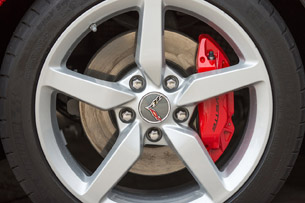 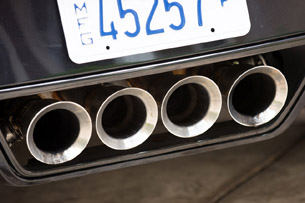 The American automaker has been making drop-top variants of its flagship sports car for decades, but Chevrolet designed an all-new, fully electric roof for the new C7 convertible. The soft cloth top may be lowered remotely via key fob while parked, or from the cabin at speeds of up to 30 miles per hour (the operation takes a little more than 20 seconds, either way). Top down, it folds completely out of sight, hidden from view by a painted hard tonneau cover. When raised, the thick multi-layered top (constructed with a layer of sound-absorbing material sandwiched in the middle) has been engineered to isolate the passengers from the outside world.

The base price of the Corvette Stingray Convertible is $56,000 – a reasonable $3,000 premium over the coupe. My you-can’t-miss-me test car, painted Torch Red over Adrenaline Red interior with optional red calipers, was lightly optioned with just four items. The first was the 2LT Package ($4,210) which included a list of convenience upgrades including heated and ventilated seats, head-up display, power lumbar and a premium Bose audio package. Second on the list was the Multi-Mode Performance Exhaust ($1,195), which is a must-have upgrade. Third was Chevrolet’s My-Link Navigation ($795) and infotainment package. After adding the red Custom Caliper Color ($595) and destination ($995), the bottom line on the window sticker read $62,795.

I’m a big fan of the C7’s significantly improved interior, which easily shames all six generations prior, as it finally allows owners to offer rides without having to apologize for lackluster passenger accommodations. The new model’s upscale materials and premium appointments surround occupants with a 360-degree sweep, and although they still aren’t meeting European standards (or even those of the SRT Viper) few will complain about contrasting stitching on the dash, well-executed switch gear and soft upholstery.

With my six-foot, two-inch frame planted in the very comfortable driver’s seat, I depressed the clutch pedal and tapped the start/stop button hidden behind the right spoke of the steering wheel. The traditional rumble of an American V8 barking to life shook the chassis.

The Stingray convertible leaps off the line and it feels every bit as quick as its published sub-four-second 0-60 sprint.

It’s hard not to fall for the LT1 under the long hood of the Corvette, as it’s a real gem. The thoroughly modern, naturally aspirated 6.2-liter eight-cylinder pumps out 460 horsepower and 450 pound-feet of torque (Chevrolet reminds us that it is the most powerful standard engine the company has ever offered on a Corvette). While GM will offer the 2014 small block mated to a carryover six-speed automatic transmission for an additional $1,350, my advice is to put the money towards a vacation and opt for the standard seven-speed Tremec TR6070 manual gearbox with Active Rev Matching instead. (If you must have a slush box, hold out for the 2015 model that will offer an eight-speed automatic.)

With a power-to-weight ratio that would make a cheetah envious, the Stingray convertible leaps off the line and it feels every bit as quick as its published sub-four-second 0-60 sprint. Throttle response is immediate, with zero delay between mashing the accelerator and your mobile phone launching out of the shallow cup holder and onto the floor. Wheel spin is easy to initiate, but also easy to control, and that makes launching a no-brainer. First through fifth gears are very usable, and plenty fun to play around with, but I continue to find sixth and seventh gears simply too tall for North American speed limits, as the engine is turning painfully slow. Even on the highway at 70 mph, the LT1 was completely out of its powerband in those last two ratios (credit the frustrating gear ratios with helping to deliver an impressive EPA rating of 29 miles per gallon on the highway, however). 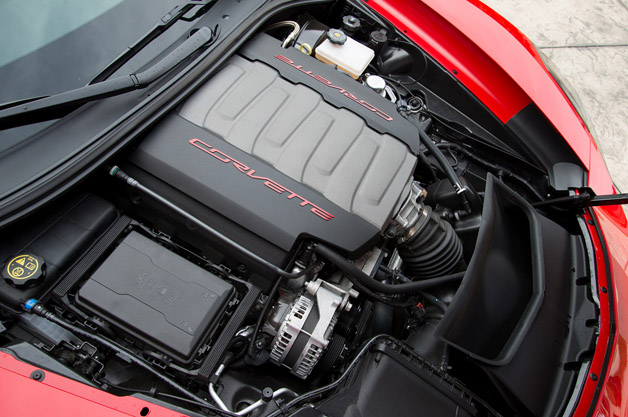 Chevrolet boasts that the drop-top’s all-new aluminum frame structure is 99-pounds lighter, and 57-percent stiffer, than it was the previous-generation convertible. “An important goal for the team was to create a more intimate and connected driving experience for the new Corvette Stingray,” said Mike Bailey, chassis vehicle system engineer. “Because they share common chassis tuning, power-to-weight ratios and structural rigidity, the coupe and convertible feel almost identical behind the wheel.”

The Corvette puts miles under its chassis without any harshness or jarring.

There is no reason to question the standard underpinnings during normal day-to-day driving, as the Corvette puts miles under its chassis without any harshness or jarring – I would call the ride very comfortable, which isn’t a word I often throw out when reviewing a low-slung performance car. With the roof peeled back and tucked away, and the windows rolled all the way down, the cabin of the C7 convertible remained remarkably pleasant. Buffeting is present, but it isn’t annoying (some convertibles seem to direct all the cold air at the top of your head or blast tornado-like vortices between the two passengers). Close the roof and the cabin becomes hushed – I would say it almost feels quieter than the coupe, as the convertible lacks the rear window that acoustically reflects tire noise forward towards the occupant’s ears. The only negative with the roof erected is the significantly reduced three-quarter view out the rear due to a thick opaque roof buttress. Convertible owners learn to accept the compromised visibility, but someone jumping in from a coupe will find it startling. 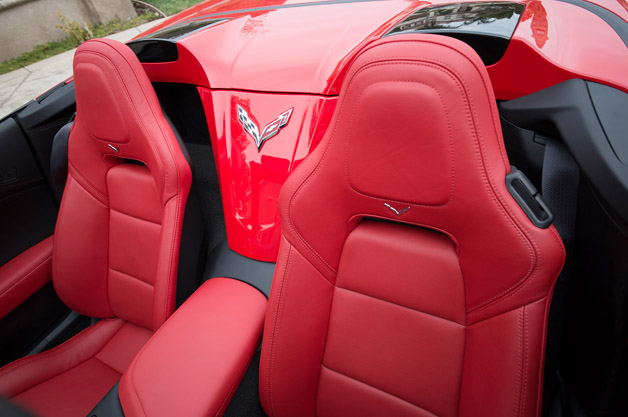 One other attribute that may come as a surprise is how much attention the drop-top commands. Make that positive attention. Even as Chevrolet dropped some of the traditional styling cues (round tail-lamps come to mind), everyone appears to like the C7’s styling – more than a few passers-by wondered if it was a Ferrari. Newborn babies, puppies and bright-red Corvette convertibles – three things that receive countless unsolicited comments from strangers.

Everyone appears to like the C7’s styling – more than a few passers-by wondered if it was a Ferrari.

Compared to nearly all of its peers within the segment, the standard Stingray Convertible is an exemplary cruiser – most of the credit goes to its long wheelbase, which provides a very nice and stable ride, and a large-displacement engine, which is effortlessly working at highway speeds. The coupe is as comfortable after the tenth hour as it is for the first ten minutes. (With an 18.5-gallon fuel tank, the convertible should be able to cover about 500 miles per tank of premium unleaded on the open road.)

The open-air C7 is a commendable grand tourer, too, as its sport-tuned underpinnings allow fast sweepers to be challenged at well above posted speed limits. Yet regrettably, the rose-colored glasses cloud over when the highway is exited and the Stingray Convertible is forced to be a chariot over extremely challenging roads – think nine-tenths driving. When pushed hard over undulating surfaces, transitioned through sharp switchbacks and asked to circle tight corners, a side of the two-place sports car was revealed that I didn’t expect – the Corvette lost its sterling composure.

The standard suspension allows the chassis to roll and pitch, and eventually bottom out on big dips.

Without the Z51 upgrade, and lacking the Magnetic Ride Control, the vehicle’s ride height is simply too tall and the dampers are too soft to accept the committed driver’s challenge. The standard suspension allows the chassis to roll and pitch, and eventually bottom out (reach the end of the suspension travel) on big dips. Rear wheels broke free on the hairpins, too. Adding to the frustration, the flexible black plastic air dam that hangs beneath the nose scrapes continuously with an awful and very unnerving noise. I didn’t recall any of that when I pushed the Z51 and MSRC equipped vehicles on similar roads last year – they were very competent – the optional equipment’s absence was glaringly frustrating.

After a week with the Corvette Stingray Convertible, my driving notes included positive mentions of the engine’s power delivery, accurate steering feel, excellent frame-less rear-view mirror and bright head-up display. But I also threw dislike at the shallow cup holders, the trunk and center storage console (both get too warm after extended driving) and the electronic parking brake, which should not be part of any manual transmission car’s equation. Many of my passengers were also frustrated by the slow push-button door releases that seemed to work like annoying gatekeepers as they curtailed quick egress from the cabin. 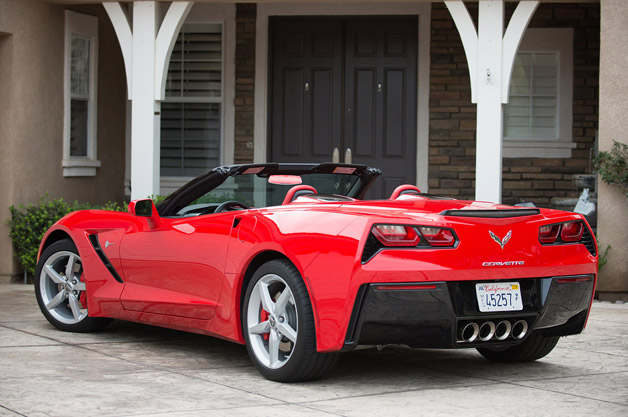 The Corvette remains an exceptional sports car and an unbeatable bargain.

The Corvette C7 has earned countless accolades since its introduction last year (including a few with my name on them) but extended time driving the Stingray Convertible platform with the standard brakes, wheels, tires, differential and base suspension made me realize that not all Corvette models are equally as fantastic – in this softer configuration, the very capable platform isn’t being fully exploited. The experience is comparatively deflating.

But while I wouldn’t recommend the C7 without the Z51/MRC combination, a slight miscalculation with the options list isn’t catastrophic enough to force it off my short list. The Corvette remains an exceptional sports car and an unbeatable bargain, which is only improved when it arrives in the form of a 2014 Corvette Stingray Convertible with a folding top.

This entry was posted in Muscle Car and tagged Chevrolet, Convertible, Corvette, Stingray. Bookmark the permalink.