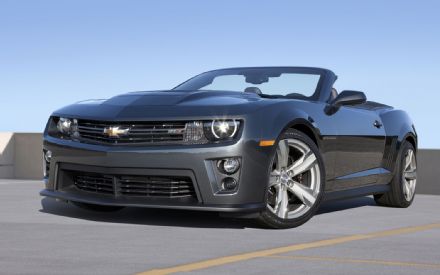 AUTO SHOWS:  If a fixed roof was the only characteristic preventing you from dubbing the 2012 Chevrolet Camaro ZL1 as the perfect muscle car, you’ll be happy to hear GM is adding a ZL1 Convertible for the 2013 model year.

Although the 2013 Camaro ZL1 Convertible won’t make its official debut until next month’s Los Angeles Auto Show, GM has released some early details on the high-performance drop-top ahead of schedule. As can be expected, the coupe retains most of the same mechanical bits as its hardtop sibling, including the supercharged 6.2-liter LSA V-8, which cranks out a glorious 580 hp and 556 lb-ft of torque. Finalized performance figures have yet to be announced, but GM says to expect near-identical performance metrics to the ZL1 Coupe.

Like the ZL1 coupe, the Camaro ZL1 Convertible continues to utilize adaptive magnetorheological dampers at all four corners, along with an upgraded Brembo brake system. Chopping off the top means the ZL1 Convertible also inherits a number of components found on other Camaro convertibles, including a front strut tower brace, a transmission support reinforcement, and a V-shaped brace across the car’s rear underbody section.

Unless GM sees fit to saw the top off the wicked Corvette ZR1 in the near future (and we doubt they will), the 558-hp Camaro ZL1 Convertible is the most powerful factory-built Chevy convertible ever built. Speaking of power, GM notes the ZL1 also eclipses the output of many luxury drop-tops including the Porsche 911 Turbo S, the Mercedes-Benz SL63 AMG, and the Aston Martin DBS Volante.

An interesting comparison, perhaps, but the 2011 Ford Shelby GT500 Mustang Convertible is perhaps a more direct competitor. As it stands, the Camaro ZL1 outmuscles that car by 30 hp and 46 lb-ft, although we hear Ford may already be readying a more powerful GT500 for the 2012 or 2013 model year.

Pricing on the 2013 Camaro ZL1 Convertible hasn’t yet been announced, but finalized figures should be announced shortly, as GM expects the car to hit showrooms by the end of the year.