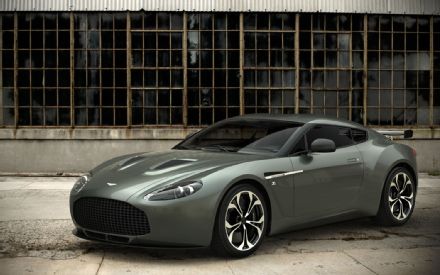 AUTO SHOWS:  From the September, 2011 issue of Automobile MagazineAston Martin’s sexy V12 Zagato has already wowed crowds at auto shows around the globe and endured the infamous Nuerburgring for 24 hours straight, but now it’s ready to tackle a new venue: public roads. Aston confirmed long ago that the Zagato-bodied racer would spawn a road car, but announced today such a vehicle will be unveiled at next month’s Frankfurt Motor Show.

Mechanically, the new car is essentially identical to the existing V12 Vantage, but the big news lies with the skin itself. Zagato has both penned and crafted a taut, lithe body from both carbon fiber and aluminum, helping the Vantage shed some weight yet gain some sex appeal. Aston’s 510-hp, 6.0-liter V-12 continues to provide power, which will likely continue to be channeled to the rear wheels via a six-speed automated manual transaxle.

Aston has long promised production of the Zagato will be “strictly limited,” but that seems to extend even to the prototypes. Two cars — nicknamed Zig and Zag — were raced at the 24 Hours of Nuerburgring enduro earlier this year, but the company has converted Zag back into road-going form for its Frankfurt show display. Aston says the car is “indicative” of the finished product, which is previewed with these new renderings. From what we can tell, the street-legal machine looks almost identical to the racer, apart from the hood (two fewer scoops), side windows (now fully functional), and front diffuser.

According the company, only 150 examples of the V12 Zagato will be built. Buyers have their choice of four colors, but not body styles — each and every example will be a hardtop coupe. Want one? Aston’s taking orders on a first-come, first-served basis, and pricing is expected to start between $525,000-540,000.