Tony Stark trades his Audi for mystery Acura in The Avengers 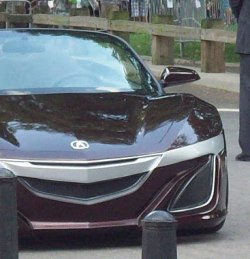 Next summer, when The Avengers opens to packed multiplexes, playboy billionaire Tony Stark will be rolling in a trick new ride. After driving an Audi R8 in the two Iron Man features, Stark apparently switches to a never-before-seen Acura sports car (in keeping with S.H.I.E.L.D.’s use of all Acura vehicles, as seen in this summer’s Thor and Captain America films).

The new ride appears in a series of on-set photos published at SuperHeroHype.com (borrowed from WENN.com) showing Robert Downey, Jr. standing next to it as Chris Hemsworth (Thor) and Tom Hiddleston (Loki) look on. Another shot, posted at WorstPreviews.com (we’ve posted a cropped version here), shows the mystery Acura convertible by itself, parked on the set in New York’s Central Park.

Note to the spoiler-averse: the WorstPreviews.com report explicitly details the scenes that were filmed, and they’re reportedly for the the conclusion of the movie. So, you’ve been warned.

We also have a note in to Acura to see if they’ll give up any other information. We’ll update the post accordingly if and when we know more.

UPDATE: Acura spokesman Gary Robinson has gotten back to us. Follow the jump to see what he had to say.
In an email to Autoblog, Acura’s Gary Robinson said the following:

“As you may know, Acura has been in the Marvel Comics Universe films as the official car of their fictional law enforcement agency called S.H.I.E.L.D. That relationship continues for The Avengers.

The open-top sports car that was photographed yesterday is a one-off, fictional car that was made just for the movie and will not be produced.

That said, as you may also know, our CEO has said publicly that we are studying the development of a new sportscar, but we can’t say any more about it at this time.”

Mr. Robinson also said that he’s unable to tell us any specifics about the use of the car in the film beyond what’s suggested in the photos, and that Acura itself won’t know the full extent of the car’s appearance in The Avengers until the film’s release next spring.