Life in the Key of M. Minor. 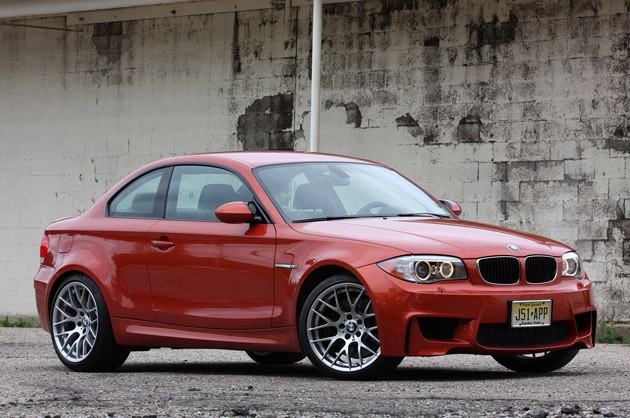 If you have read the breathless reviews and overwritten comparos, you would assume that the 2011 BMW 1 Series M Coupe is infused with the second coming of Senna. And for BMW to unabashedly draw a line between the M Coupe and the most holy of holies, the 1986-92 E30 M3, smacks of PRified nostalgia stoking. Call me a contrarian, but I refuse to believe the hype.

So as soon as the orange Bimmer landed on my fleet schedule, any and all reading, writing and discussion about the littlest M ceased. I would drive it for a week, live with it as if it were my own and deliver a critical, blatantly unbiased review of Life in the Key of M.

Five minutes into my first drive, I immediately pulled into a turnout, sat there for a second, took a deep breathe and realized – dammit – everyone was right. Brilliance is back in a small package.
Yes, brilliance. Surprising considering the M Coupe is the prototypical parts-bin special. But then again, when your parts bin is made up of some of the best driver-oriented bits in the biz, brilliance isn’t expected, it’s demanded. 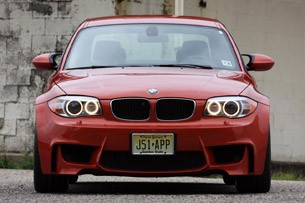 So let’s start with the core of any M-badged vehicle, the engine. It’s the same twin-turbocharged N54 inline-six fitted to the Z4 sDrive35is and my current favorite non-M 3 Series, the 335is. Three liters of displacement and those duo of turbos put out 335 horsepower at 5,800 rpm and 332 pound-feet of torque from 1,500 4,500 rpm through the car’s only transmission option: a proper six-speed manual. Peg the throttle to the floor and, if the ECU favors the conditions, an overboost function allows the turbo six to deliver an additional 37 torques, bringing the total up to 369 lb-ft. BMW claims a 0-60 mph run of around 4.7 seconds, but I don’t buy it. My ass might not be as highly calibrated as other hot-shoe scribes, but there’s no doubt the M Coupe is a solid 4.5-second runner – and instrumented testing both here and abroad bears this out.

Forward momentum in any part of the rev range is immediate and addicting, devoid of lag unless the needle is on the far left side of the tach. And even then, that minute pause is instantaneously consumed by traction-testing torque, a subtle turbo whine and an exhaust note that’s more guttural drone than screaming sex six. Then again, this isn’t an “M” engine. It’s a chip and a massage. But it simply doesn’t matter. 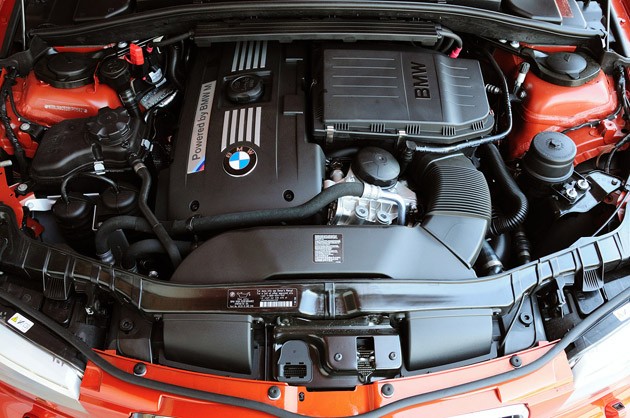 What has been pulled from the BMW’s motorsports arm are the bits that matter most: everything shoved into the wheel arches and connected to the driver.

The front track has been extended by 2.8 inches and fitted with double pivot struts, while the rear has grown 1.7 inches and equipped with the standard multilink suspension, both of which are comprised entirely of aluminum. The rolling stock is pulled directly from the M3 Competition Package, including 19×9-inch front wheels wrapped in Michelin Pilot Sport PS2 rubber sized 245/35R19 and 19×10-inch rear rollers with 265/35R19s.

That combination may say “stick” on paper, and it does… until you disengage the traction control. And trust me, you will.

With the system set to Normal, the Axis light on the dash flickers with the insistence of a Christmas tree with an electrical short, pulling power at the faintest hint of wheel spin. The accelerator, well-mannered in most environments, goes from tepid to tenacious with the flex of your foot. But if it’s slightly numb in its standard setting, it’s a different beast when engaging M Dynamic Mode. All the lil’ steering wheel-mounted M button does is recalibrate throttle response, delivering a surge of rubber-ripping acceleration further down the pedal travel. Neither setting is particularly bad, but on-edge confidence suffers as a result. 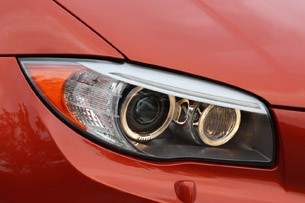 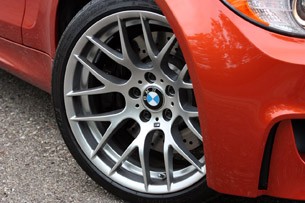 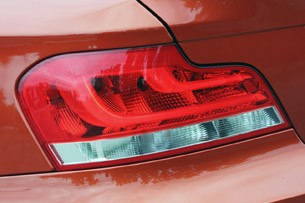 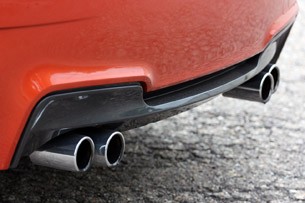 So when the time comes to dispatch all the electro-nannies, your right foot and two hands had better be ready to respond. Quickly. The amount of traction afforded by those massive meats is almost in direct opposition to the 104.7-inch wheelbase. So the M Coupe goes from grip to gone in an instant. No, this isn’t the predictable breakaway we’ve experienced in the larger, more portly M3 (or any other M, for that matter). That’s due to a number of variables, but chief among them is the 1’s nearly square dimensions.

But when you hit it right, with the exact amount of power, the right amount of bank and the precise amount of steering, the 1 does what every proper M car should do: hangs out its tail until instructed otherwise.

Much of that sure-footed ease comes at the expense of overall ride quality when ambling about town, but it’s nowhere near unbearable, and at speed, and for the 1M’s intended audience (Hi Mom!) it’s no-nonsense perfect. That same perfection winds its way up through the leather-wrapped wheel thanks to the M3-sourced speed-sensitive steering rack. That ever-so-slight sense of vagueness in the standard 1 Series is gone for good – and it was damned good to begin with. The clutch, while overly springy, has a perfectly defined friction point and the six-speed manual gearbox never ceased to impress and reassure each and every time we grabbed a gear.

The brakes are another matter, but only because of their track-focused brutality. Cross-drilled and sized 14.2-inches in front and 13.8-inches out back, they never faded, never shuddered and never faltered. They also make smooth heel-and-toeing a near impossibility. Just breathing on the middle pedal sheds off velocity in an instant, but when attempting that life-affirming throttle blip, my right calf was stretched to its breaking point. This could just be a product of journo-inflicted wear or a brand new set of pads, but it was enough to stymie an otherwise faultless backroad run.

Other faults? Without getting into fuel economy numbers (estimate: 19/26 mpg, observed: 17.8), the transition from HD to ST on the radio would double-up the audio, and while the Alcantara on the dash trim and shift boot is a nice touch, if you’re going to go full-M, why not coat the steering wheel and shift lever – the two most important touch points – with the same delectable material? Yes, it’s a dealer option on the base 1 Series, but for $47k and change, you’d assume it would be standard on the 1M. 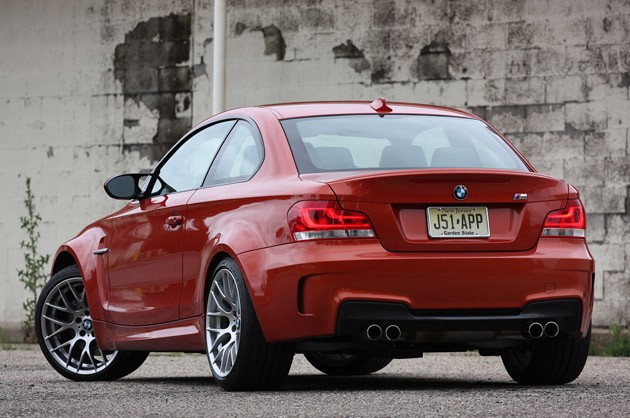 But these are infantile nits to pick when looking at the M Coupe as a whole. This is a pure driver’s machine through-and-through – a true M, or at least the closest we’ll get in the 21st century.

Which brings up a larger point. As enthusiasts, we have to come to grips with the fact that no modern automaker can match the involvement and tactility of a vehicle designed before massive feature creep and ever-expanding safety regulations. That time has passed. And while this isn’t the E30 M3 successor we might’ve hoped for, in many ways, it’s better. The 1M is more livable, more powerful and surely more reliable. It sticks harder and goes faster, and BMW did its best to remove the buzz-killing insularity that plagues most modern vehicles. The 1M delivers what M-heads value most: driving delight über alles. And it’s one of the only times in years that anything with four wheels has lived up to the hype.