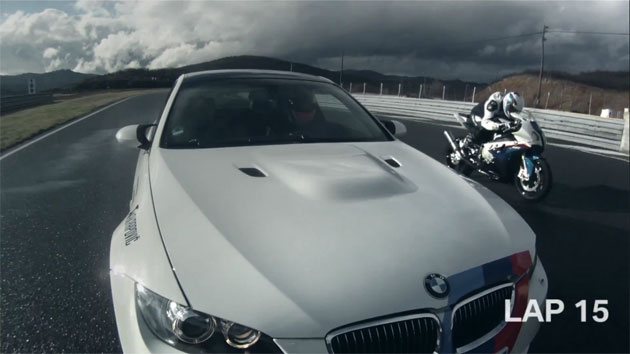 Common logic says that where two wheels are good, four wheels are better. That’s especially true when the skies open up and the track turns wet. BMW Motorrad wanted to put that logic to the test, so the company recently lined up two of the meanest pieces of machinery in the German manufacturer’s stable: the mighty BMW M3 and the sinister S 1000 RR. Thanks to some tinkering by Akropovic Evolution, the 4.0-liter V8 engine in the M3 now kicks 442 horsepower to the rear wheels with a curb weight of 3,571 pounds.

The BMW S 1000 RR, meanwhile, was strung out to around 198 horsepower while weight was stripped down to a mind-boggling 434 pounds soaking wet. The two were made to square off on opposite ends of the same track. The first racer to catch the other won bragging rights for not just themselves, but the auto or moto faithful as well. How’d it go? We won’t spoil it for you, but we will say it took the victor just 15 laps to reel in his adversary. Hit the jump to check it out for yourself. Thanks for the tip, Craig!